I had a sore tooth a while ago and it gave me a few sleepless nights! So teething definitely impacts sleep, and it can cause your child to be very irritable and cranky, even during the day.

When does it start?

Most babies get their first tooth between 4 and 6 months, but some get theirs as early as 2 to 3 months and others don’t get theirs until a year!

Between 2 ½ and 3 years, your toddler should be sporting 20 milk teeth!

How long should it last?

As a general rule, we always say that teething is at its worst when the teeth are coming in and breaking through. It should affect sleep for about 2-3 days. Except when they are coming in back to back or multiple at a time!

Too much drooling is also not always a sign that a baby is teething. Around 2 to 3 months, your baby’s third set of salivary glands will be fully developed. This will cause your baby to drool more, but they may not be teething yet. Developmentally your baby will want to put things in their mouth or suck their hands – so this is also not necessarily a sign of teething.

The time when babies are teething is also when their immune systems aren’t working as well and when they switch from passive to active immunity. Basically, this means that they are losing the antibodies they got from their mother while she was pregnant and maybe even while she was nursing. They now have to make their own antibodies.

This happens at a time when they are putting their hands in their mouths a lot more and when their gums are starting to erupt and are raw. So, this must be a time when there are more infections, from the upper respiratory to the middle ear to the urinary tract.

So, not only are your baby’s first teeth the most likely to cause problems, but they also come in when our children are younger, when their immune systems aren’t as strong and when their bodies are going through a lot of other changes.

So what are the signs?

One of the biggest signs that a baby is teething is that he or she is fussier, irritable and wants to nurse more often. They may also have more trouble sleeping, since tooth pain can get worse when you lay down. At the site of the eruption on the gum, you may also see some redness and a tiny white spot.

Why is teething worse at night?

Your baby might be happily playing during the day, not seeming to be bothered too much by teething, and then at night all hell breaks loose! One of the most common reasons is that during the day they are distracted by toys and stimulation, eating and nursing frequently, and sucking on their fingers, hands, or toys which all relieve some of the pain.

At night when they are lying flat it causes increased pressure on the head which might cause more pain. It might also be due to lower cortisol levels which is an anti-inflammatory hormone.

What you can do to help:

We do not recommend the use of amber necklaces as they pose a strangulation hazard. Also avoid the use of teething gels which contain benzocaine.

Science says that teething symptoms are minor and have more to do with discomfort than illness, so if your baby is sick, it’s likely that they are sick. That might need a whole different kind of treatment.

If your baby has a fever or diarrhea, which can be very dangerous for babies and cause them to become dehydrated, you should see a doctor.

Also, if they haven’t eaten in days or are very irritable every day, you should take them to the doctor. There could be something else going on that they can’t tell you about. And if it’s just a problem with sleeping, let us know and we’ll be happy to help.

For interest’s sake, a general chart of the appearance of baby teeth! 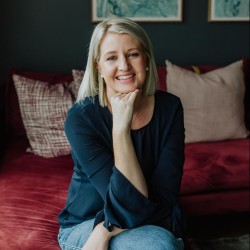 Sleep Coach, Wife and Mama of 2. God is king, Stellenbosch is home and three things I love are Spring, Wine and goooood coffee!

The Two to One Nap Transition

This website uses cookies to improve your experience while you navigate through the website. Out of these, the cookies that are categorized as necessary are stored on your browser as they are essential for the working of basic functionalities of the website. We also use third-party cookies that help us analyze and understand how you use this website. These cookies will be stored in your browser only with your consent. You also have the option to opt-out of these cookies. But opting out of some of these cookies may affect your browsing experience.
Necessary Always Enabled
Necessary cookies are absolutely essential for the website to function properly. These cookies ensure basic functionalities and security features of the website, anonymously.
Functional
Functional cookies help to perform certain functionalities like sharing the content of the website on social media platforms, collect feedbacks, and other third-party features.
Performance
Performance cookies are used to understand and analyze the key performance indexes of the website which helps in delivering a better user experience for the visitors.
Analytics
Analytical cookies are used to understand how visitors interact with the website. These cookies help provide information on metrics the number of visitors, bounce rate, traffic source, etc.
Advertisement
Advertisement cookies are used to provide visitors with relevant ads and marketing campaigns. These cookies track visitors across websites and collect information to provide customized ads.
Others
Other uncategorized cookies are those that are being analyzed and have not been classified into a category as yet.
SAVE & ACCEPT
Chat Now
1
Powered by
Hello!

We are Zanda and Lindi, your Sleep Sidekicks 🦸‍♀️🦸‍♀️